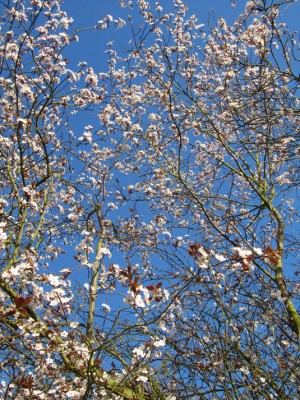 A primary concern in all of Emma’s garden designs is context or ‘spirit of the place’: a garden inspired by Islamic principles must never look imposed from the outside but should appear  totally at home in its environment. This is key to the success of any garden but especially an Islamic-inspired garden when it is situated outside what is generally accepted as ‘the Islamic world’, for example, the U.K. and northern Europe. Thus plants are chosen with special care to fit the local surroundings as well as recall the Qur’anic paradigm.

Another prime concern is sustainability: use of local and natural materials, selection of plants and trees suitable for the particular environment, and the conservation of water are all crucial factors in Emma’s design practice. Working with the landscape architect, Adam Hunt of Petherick, Urquhart and Hunt, who specialise in bio-diversity and naturalistic planting as well as knowledgeable use of sustainable materials, has consolidated and expanded her approach.

An important consideration is the integration of the garden and wider landscape with the architecture of the house or building. This is a characteristic feature of the traditional Islamic garden – always there is a close relationship between the two: not only a harmony of design and materials but also fluidity of movement between interior and exterior space.

Planting: The choice of plants and trees is guided by several criteria: first, the Qur’an itself and the demands of the specific site; second, ideas inspired by combinations of colour, form and texture seen and experienced by the designer and her team in the gardens and parks – both great and small – of the world; third, and above all, Nature herself. Nature’s own design, with her total submission to the seasons and response to the climate, is both the greatest inspiration and greatest teacher for a garden designer. There is constant reference throughout the Qur’an to the signs and symbols in the natural world (‘And of His signs is the creation of the Heavens and the earth’, XXX;18ff) and how they may teach us if we ‘had eyes to see’. Their transient beauty acts as a reminder of the sacredness of life itself. Nature is a great and bountiful gift from Heaven and our true role is as her steward (khalifah). If we truly understood this then she would be given due honour and respect and more effort would be made towards slowing down the environmental crisis.

Contrary to what may seem to be the case, it is possible to combine naturalistic planting with Islamic design principles of order and Unity – a balance between the two resulting in, God willing, a vibrant and harmonious whole. Divine unity is the central message of the Qur’an and is not only the profound principle at the heart of a beautiful Islamic garden, but is also at the heart of all great Islamic art and architecture. 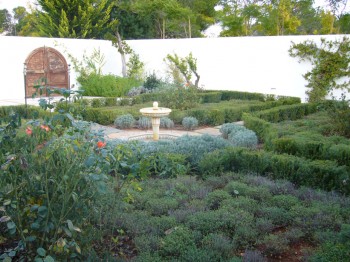 One of the primary aspects of an Islamic garden is that it is a sanctuary, originally an escape from the harsh arid landscape into an oasis of shade and water. A contemporary Islamic garden in the city echoes this escape since it offers an ‘oasis’ of green and calm within noisy and polluted surroundings. A recent statistic (January 2012) stated that 80% of the world’s population now live in urban environments, and thus more than ever do we need havens of green and quiet.

Indeed, the only word spoken in the Qur’anic gardens of Paradise (Jannat al-firdaus) is Salaam, ‘Peace’. Thus, Emma’s design practice focuses always on the ultimate aim of creating this green retreat, often with water flowing: the outer beauty and stillness nurturing the inner soul of the visitor who, God willing, is given a taste of the peace and contentment of the eternal Heavenly garden.